Join us September 17 for a rare one-on-one discussion with the legendary Duncan Milner on the future of advertising. Known for his iconic work with Apple (Mac Vs. PC, The iPhone) and brands like Nissan, Pepsi, Mars and Levi’s, Duncan Milner is a visionary creative and brand building expert. 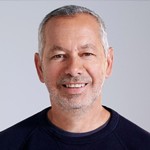 Born in Kingston, Jamaica, Duncan was drawn to the world of advertising, intrigued by the clash of art and commerce. This led to art school in Toronto, and the launch of his career at several small, but creatively respected shops in San Diego, where he did work good enough to catch the eye of Chiat/Day.

Duncan Milner began his unprecedented tenure at Chiat/Day in the San Francisco office, where he met Lee Clow, who would become an influential mentor in Duncan’s career. This led to Duncan being handpicked by Lee to co-found TBWA/MAL as Chief Creative Officer, working closely with Steve Jobs to help re-build the Apple brand, launching the iPod, iPhone, iPad, Apple Watch, and Apple TV and the iconic “Mac vs. PC” campaign. (named Campaign of the Decade by Adweek)

Duncan is joined by Abacus Agency Co-Founder and Chief Strategy Officer Jeff Goldenberg, one of the industry’s leading creative agencies and winner of the 2019 ADCANN Agency of the Year.Jeff will tackle some of the toughest questions facing advertisers in the next five years: the death of TV, the future of data-informed creative, the rise of mobile and much more.

Due to overwhelming demand, attendance to this live event is limited.

Abacus Agency
Back to Listings